TBM would like to recognize our friends and partners at Manuel’s Tavern for their addition to the National Register of Historic Places on May 29th, 2020. Manuel’s Tavern, located in the Poncey-Highlands neighborhood of Atlanta, has been owned and operated by the Maloof family since its creation in 1956. TBM Principal Steve Maloof is the son and nephew of Robert and Manuel Maloof respectively, giving us a great personal connection to this historic establishment. As well as being a cornerstone to the development of the North Highland Avenue corridor, it has also been the heart of the Atlanta political scene. Its rich history is nothing new to anyone who lives in Atlanta, but now Manuel’s Tavern has been recognized on a National scale. 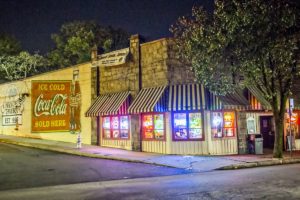 “Established in 1956 by Manuel Maloof, this popular Poncey-Highland neighborhood restaurant and bar is ‘associated with the undercurrent of Atlanta’s political and social realm,'” the Atlanta Preservation Center said in a Facebook post announcing the honor. “Manuel’s Tavern has long been recognized as a space welcoming to all, regardless of race, sex or social status.”

“The Manuel’s Tavern space occupies a circa-1922 commercial building with board and batten siding with ashlar granite pilasters along the North Highland facade. Interior historic features include plaster walls with wooden wainscoting, terrazzo floors and beadboard ceiling.”

Long before Manuel himself started his own path into politics, Manuel’s Tavern served as a local neighborhood bar. Manuel purchased the storefront at the corner of North Avenue and North Highland Ave for $11,000, which had been the previous home to Harry’s Delicatessen (which started serving beer after the end of prohibition). He wisely located his business close to the boundary of Fulton County (which permitted the sale of alcoholic beverages) and DeKalb County (which was dry), which provided students (as well as professors) from Emory University and Agnes Scott College in DeKalb with easy access to an otherwise off limits drinking establishment. Manuel’s would continue to expand until eventually taking over the entire building.

While Manuel served as the namesake of the tavern his brother Robert joined him as an owner and business partner a few years later and eventually ran the day to day operations as Manual focused on his political career. Manuel went on to become Dekalb County Commissioner from 74’-78’, Commissioner Chairman from 80’-84’, and then Dekalb County CEO from 85’-92’, after the county changed to a single CEO leadership format. It was his influence that helped expand the number of minorities and women in top government positions, as well as the development of the 85 and 285 cloverleaf, or ‘Spaghetti Junction’ as we know it here in Atlanta. 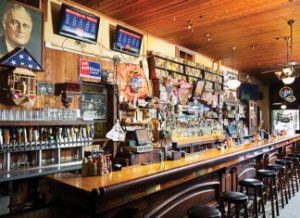 While Manuel’s career in politics continued to grow, so did Manuel’s Tavern, thanks in part to Manuel’s brother, Robert. Robert managed the day to day operations of the tavern for more than 50 years until his retirement in 2006. While the two brothers didn’t always see eye to eye, they always found common ground on the ultimate direction they wanted for the bar, and that was a place where everyone could come and feel welcome. Manuel was known for his politics as well as his gruff exterior but was if fact a nice man that wanted to make things better. Robert, by contrast, was the guy that would slap you on the back, sit down with you at your table and make you feel like you belonged. There was an appreciation for being there, and that feeling made Manuel’s Tavern feel like ‘my bar’ to its patrons. Robert also maintained a level of modernization, while staying true to the principles that make Manuel’s Tavern what is. Introducing mixed drinks, creating outdoor patio seating and expanding the food menu to name a few.

Both brothers helped mold Manuel’s Tavern into what it is today, a place for politicians, newspaper reporters, and sports figures as well as contractors, businessmen, and college students to all come together. Brian Maloof, the son of Manuel and current operator of the establishment, has continued to run the family business and maintain the vision that both Manuel and Robert had when they started it, a tavern welcoming to all. With Manuel’s Tavern now being on the National Register of Historic Places it should continue to be Atlanta’s most legendary and colorful drinking establishment.

This website uses cookies to improve your experience while you navigate through the website. Out of these cookies, the cookies that are categorized as necessary are stored on your browser as they are essential for the working of basic functionalities of the website. We also use third-party cookies that help us analyze and understand how you use this website. These cookies will be stored in your browser only with your consent. You also have the option to opt-out of these cookies. But opting out of some of these cookies may have an effect on your browsing experience.
Necessary Always Enabled
Necessary cookies are absolutely essential for the website to function properly. This category only includes cookies that ensures basic functionalities and security features of the website. These cookies do not store any personal information.
Non-necessary
Any cookies that may not be particularly necessary for the website to function and is used specifically to collect user personal data via analytics, ads, other embedded contents are termed as non-necessary cookies. It is mandatory to procure user consent prior to running these cookies on your website.
SAVE & ACCEPT